The country of Croatia shown by Haiga from Croatian authors.

Every week we present one haiga by a Croatian author/authors. You are welcome to send three of your unpublished photo-haiga, size 2000 pixels on the longer side of your photograph to the Editor: dvrozic@gmail.com

On your haiga please note the name of the author/authors. Please write the Haiku in Croatian and in your e-mail message you may give the Editor its version in English. Also, in several sentences please let us know how this particular haiga was created.

A photo-haiga consists of two art forms, haiku and a photograph. It is important for your haiku not to describe the photograph, nor should it create any misunderstanding. Haiku and the photograph should complement each other and depict an atmosphere of sincerity, buoyancy and depth, creating a piece of art which is more valuable than each separate expression. You need to explore reality and move away from the expected poetical clichés. Be original.

In the spirit of sume-e painting, let your haiku and photography be free of any redundancy. Empty space is important. Explore and take several photographs of the item of your interest until you achieve something especially good. Let your choice of photograph speak of poetry. Take care about choosing the font with which you will write the haiku concerning your photograph. Try several different fonts until you have no obtrusive connection of the letters (shape, colour and size) with the photograph and mood of your art work.

In your haiku do not be a slave to the form of 5-7-5 syllables at the expense of the literary quality of the poem, avoid adjectives. Remember, kigo impersonates the transience of everything and denotes constant changes of everything alive. Only one kigo is allowed in your haiku. Be short and clear, use simple words understandable to each average educated reader. Unfamiliar words may be wrongly interpreted and draw the attention away from such a short poem. While your reader looks up a word in a dictionary, your haiku has lost his/her attention. Remember, haiku is complementary with our rushed, everyday lives. It is clear and short and may be read on sight. It of course hides a story to be thought about.

Try to connect your poem with the photograph in the best possible way. Create several haiga and edit them until you attain the best results. Take care about the main postulates in fine arts. Lay aside your haiga for some time and then return to them several days later. It will be easier to pick the best work. Or, you will create an even better one in a new attempt.

midsummer
a scene in the forest
reminds me of Christmas

As a child, the forest ferns reminded me of a perfect Christmas tree.
Every school year I create Christmas cards with my pupils.
One year I had an idea of using the ferns for these cards.
Since then, while still green and fresh in the woods, in the summertime, I pick the fern leaves and press them in books.
When dry and straight I use them as the base on a Christmas card, to be decorated in a number of different ways.
Everytime I see a fern in the woods, it reminds me of Christmas time. 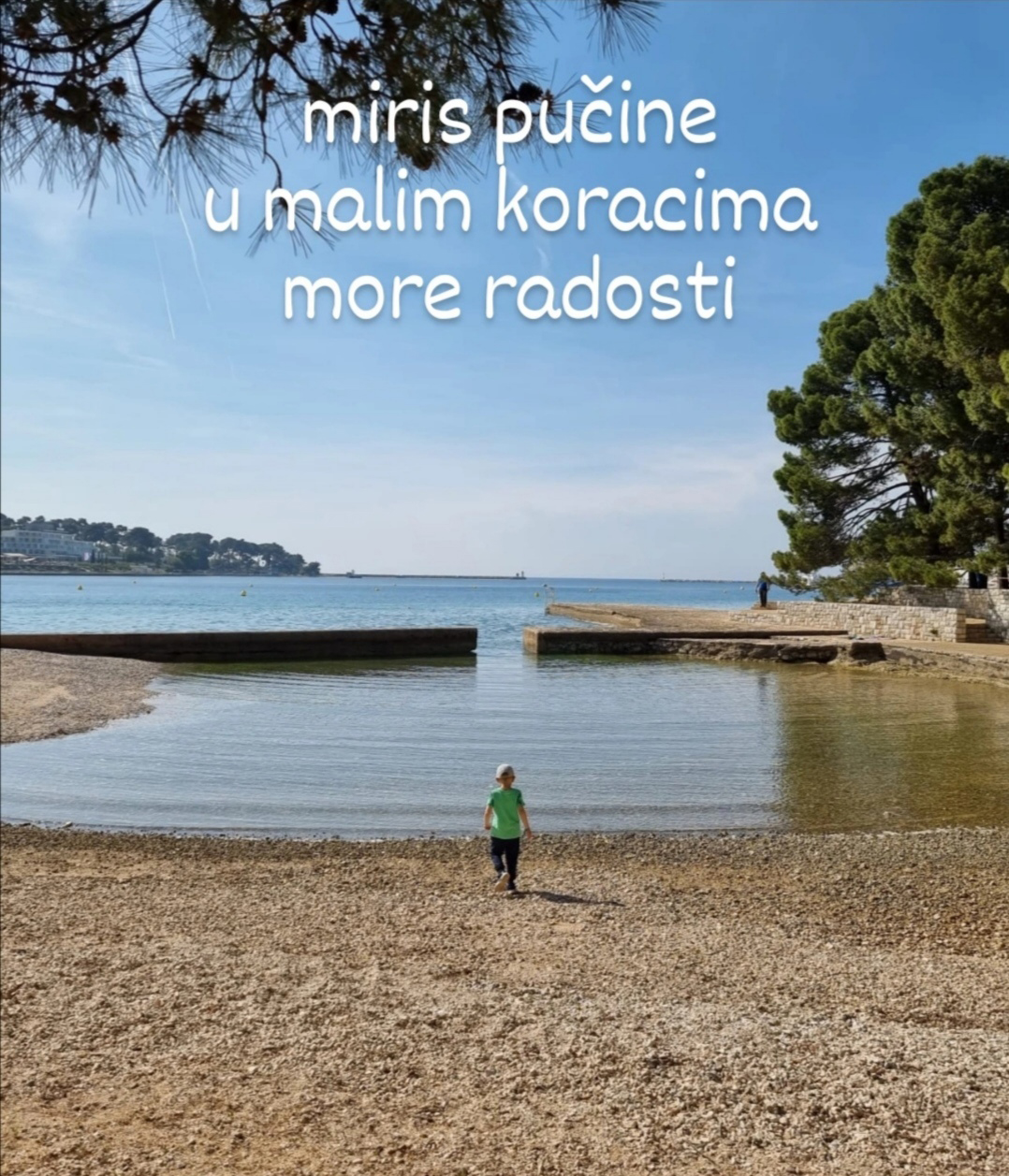 the scent of deep sea
so much joy
in small steps

Springtime and still not time to take a swim. But, memories of last year’s sea merriment in the same place, in this shoal, invites a little boy to investigate the area again. Perhaps he is thinking of this Summer and he will cross the shallow boundary and swim like a big boy… This is a joyful family photo-note in the boy’s 6th Springtime. 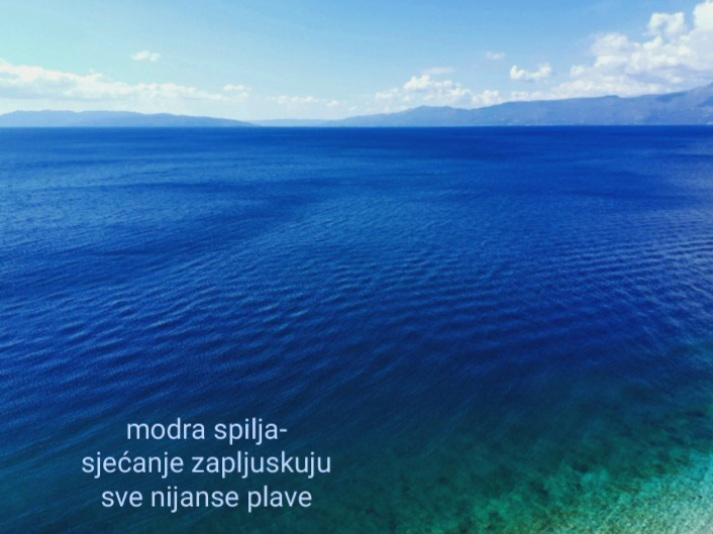 a Blue Cave ̶ *
all the shades of blue
splash my memories

If not the most beautiful, but surely among the most beautiful views out to sea from the town of Rijeka in Croatia to be viewed from this place, above the Sablić beach, at Pećine. On this pre-summer day the rippled sea kept on changing its blue colours and enlivened my memory of our Blue Cave. Some moments, like these – are indescribable but they live with us and surprise us over and over again with their manifestation.

* A waterlogged sea cave located in the Balun bay, the island of Biševo, the Adriatic Sea, off the coast of Croatia. 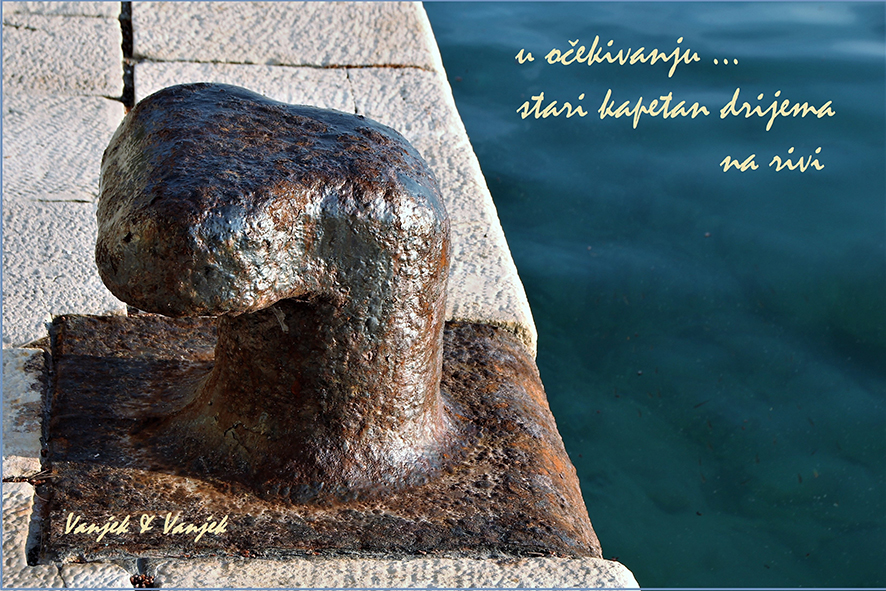 expectation …
an old captain dozing
on the shore

My husband and I were at the beach of the Adriatic island where we were spending our summer holidays. That particular day we were waiting for the ferry with our children to join us, excited and restless, wanting to hug our grandchildren. 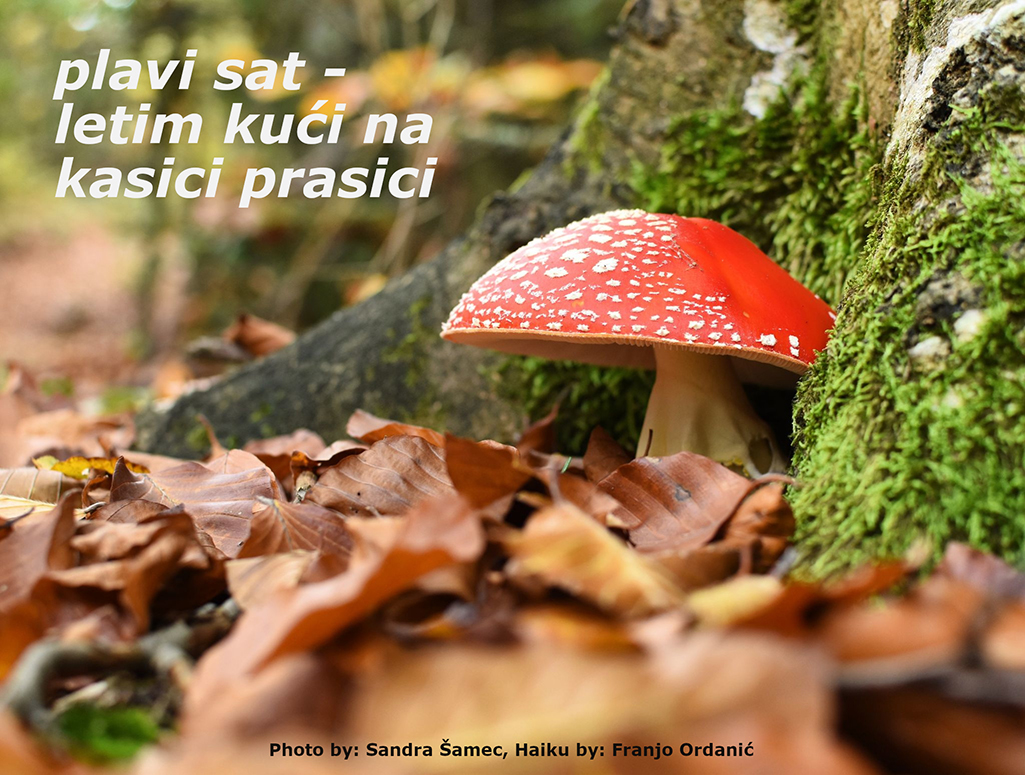 A bright red beauty with irregular white dots, itself almost a perfect shape, suddenly caught my eye on the mountain path, where I was hiking to the top of the Medvednica Mountain, towering over the city of Zagreb, Croatia. The mushroom was sheltered and embraced by a thick tree trunk and it gave an impression of being different from its lonely colleagues. I was not in search of it, it showed itself to me and lured me with its charm.
I knew it was worth photographing, so I took the trouble to take my camera out of my rucksack. Then we had our photo session in the most beautiful natural environment. A break from walking was welcomed, so the session lasted some time. Yet, well aware of its beauty, this mushroom named Fly agaric was patiently there for me and my camera while I was adjusting the frames. After taking several photographs I thought as successful, I returned my camera into my rucksack a started towards the mountain top. There was no other mushroom on the path whatsoever!